While reading Tehzeeb if there is one recipe that haunted me it was tikkia and alu, I have never had it before and the picture in the book looked droolworthy. Also the recipe was quite interesting. I love aloo and eggs together but I have always made them together in the form of a curry and not a dry sabzi and alu was just that, thin slices of potato and onions cooked with tempered methi seeds and chillies and served with sliced boiled eggs. Whats not to like I ask.

Tikkia on the on the other hand was rotis made with stiff poori like atta on slow flame and finished off with a brush of milk. Almost like a cross between mathri and parantha and no oil at all apart from a little ghee that went in the dough. I was convinced this has to be tried in the house.

I called a friend of mine who is from Lucknow and he told me that his grandmom used to make it for breakfast and serve it with hot steaming cup of chai. Last week at my house I did the same. Everyone in the house from the househelp to the child licked the alu loved it, the child actually licked the bowl clean and here we are talking about a child who is probably the king of picky eaters. Heck he is a king of non eaters. I now have standing instructions to make this twice a week atleast

The tikkia however had mixed response in the house, there were a set of people like me and MIL who loved it whereas the N and O preferred a plain parantha over tikkia. MIL even kept one for later and had it dipped in chai 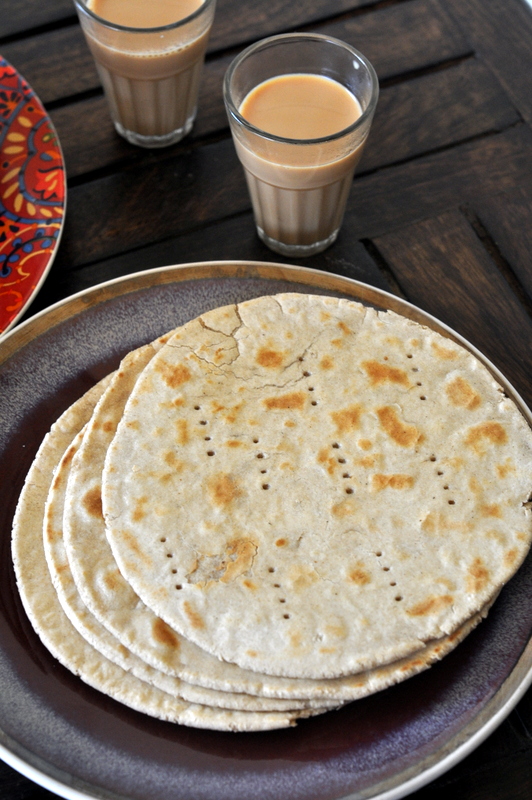 How I made it

How I made it

This recipe is part of the endeavor to create a collection of recipes of Lucknow/Awadhi Recipes in collaboration with a few bloggers who share the same passion of cooking. All the recipes from #thekitchendivas are pinned on this Pinterest board.
Other Lucknow/Awadhi recipes this week from #thekitchendivas
Bakarkhani Roti from WhiskAffair
Awadhi Arbi Ka Qorma from Saffron Trail
Shahi Dal from FunFoodFrolic
Broccoli Malai Kofta from Archana’s Kitchen